my take on "The Reimagined Battlestar Galactica" 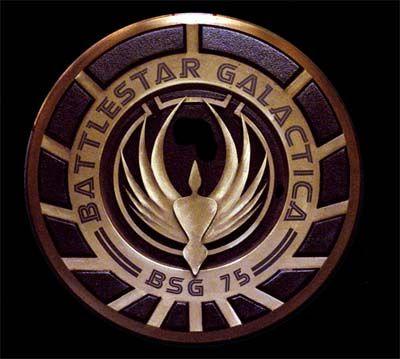 While obviously and most certainly more eloquent and experienced folks have already covered lots and lots of ground on this particular topic, I still think I’m entitled to do my own posting on Battlestar Galactica - The reimagined series, furthermore abbreviated to BSG.

Coming from a perspective of being one of many serious Star Trek fans who have watched absolutely every episode and movie there is out there, presently I can’t tell which of these I like better. Star Trek or Battlestar Galactica. While for many people this is judged on a strictly “religious” basis, I dare say that there is no way of making a statement of this sort, not even an educated one. Prior to writing this, I’ve often times wondered if I should even touch on Star Trek, when actually writing about Battlestar Galactica. The day may come where I don’t do comparisons at all.

So let’s jump right into it. First off, after watching the Pilot Episode of BSG, I was instantly hooked. I mean like hook, line and sinker. And that 10 Minutes into the Pilot Episode. Call me Nerd but the “2001: A Space Odyssey” camera movement and transition style at the beginning may have played a major role in this winning-over. BSG instantly creates a reality and is sucking you right into it by stating “historic facts” as text on screen and making this sort of a documentary. The first spoken dialogue on screen is: “Are you alive?” - “Yes” - “Prove it”. Then one of the sexy Cylons' Model 6 kisses a Human. During this happening, the space station they’re on, is being bombarded and blown to bits and pieces. Acts of love and war so painfully close together. That’s as real as it gets. The camera flies through space past an asteroid and zooms in on the Galactica. After seeing some press guys being toured through the humongous space ship, you see an authority radiating Commander William Adama on his walk to the hangar deck, obviously rehearsing for a speech, being interrupted time and again by his officers that update him on their progress and asking for further commands. Best yet: the Chief Petty Officer of the hangar deck standing at attention with his whole crew unwrapping a Mk II Viper; sorry “the” Mk II Viper. You know. The one with the call-sign “Husker” on it. Exactly at minute 10, Commander William Adama holds a very memorable framed picture in his hands.

You get the idea, yes, I’m a total fan. Never before has a Television Series won my heart so quickly, despite being the darkest series I’ve watched to this date. It’s not a larger-than-life thing. It’s a very honest representation of modern day life in a different setting and of course with some exaggerations to hammer home a point. While the climactic plot of some movies is armageddon, BSG starts with this sort of annihilation of life and sends off roughly 50000 people on their journey of continuation of the human race. Their enemy being their own creation: The Cylons. A life-form artificial and intelligent and obviously outraged and in a killing mood, for whatever reason.

The characters throughout the series are depicted in a very realistic manner. Where other sci-fi sagas paint a picture of lager-than-life characters BSG very well demonstrates the shortcomings of human beings on various occasions which makes them ever so more loveable/gross and tangible. And this includes also the highest ranking leaders. Presidents, Admirals and Deities. I think there is at least one scene committed to every single lead character which depicts them in a broken state. Yes, broken. The writers have done a very thorough job of displaying both sides of human beings. Achieving the unfathomable and being marvellous creations while in contrast everybody’s got something up their sleeves they’d rather not unearth in public.

BSG has been the first of all TV series I’ve watched that really has moved me on more than one occasion. Whilst being a guy (meaning that usually I don’t do tears or lumps in the throat) BSG achieved just that. The only Episode in Star Trek is Star Trek: The Next Generation - The Inner Light that ever made me have small tears in my eyes. I think that’s because of the realism and tangibility that’s brought across.

The viewer is constantly being surprised by the twists in the storyline. Where you think it couldn’t get any darker or weird or awesome or sexy, in fact it can be and you’ll be demonstrated just that shortly. The writers went to the extreme and things happen on screen that usually don’t happen on other TV series. At least not in those you get from Hollywood these days.

Music in BSG has been a delight all the way! I can’t think of another TV series that has so well crafted scores and surprisingly fresh ideas. The instruments used in scoring are remarkable and often times unusual. I’ve found myself humming lots of musical themes from BSG whereas in Star Trek it’s only the theme songs and the Ressikan flute solo from “The Inner Light” written by Jay Chattaway. Bear McCreary, who did the major parts of composing, earns my admiration for his body of work, especially on BSG.

Another positive thing about BSG, in respect of being a past 2000 film production, is the sparing use of foul language and cursing. A euphemism for the extremely overused f-word in Hollywood productions created a cult of its own. The fictional profanity of the future: Frak. Sometimes, world, be thankful that there’s the FCC. Fun Fact: Even Whoopie Goldberg thinks the word “Frak” is a blast. See for yourself in a video, where BSG hangs out with the UN. (I linked to the part, where Whoopie thanks God for the word Frak.

BSG hangs out with the UN

There was a video online in which the cast of the BSG TV series was at the United Nations Headquarter. It has since been made private. They were having an inspiring discussion about human rights and how the material depicted in the series provided a gateway into processing atrocities happening in the real world through generous employment of the artistic license.

Several times throughout the series I’ve noticed that dialogue was hardly intelligible due to lacking sound quality. My best guess would be the production couldn’t afford re-recording of dialogue due to lack of time and just used the audio from the boom mic. Sometimes one could even hear a hissing in the very high frequency range above 17kHz which wasn’t filtered out. Either because of budget considerations or contentment with the quality as the series is “only” going to be broadcast to mediocre TV sets. To be honest though, I’ve watched the series with my studio monitoring headphones, which is generally obviously not the smartest of all ideas. Especially when you’re the ambassador of aesthetics in media and technology.

And lastly to all fans of BSG. Compare the Memory Alpha Wiki of Star Trek to the Battlestar Wiki and you’ll find that Star Trek is ahead of the game in terms of documentation. So BSG fans, Admiral’s orders: Get your lazy, fat asses up, move out and fill the void that is the BSG Wiki.