my take on the Brexit 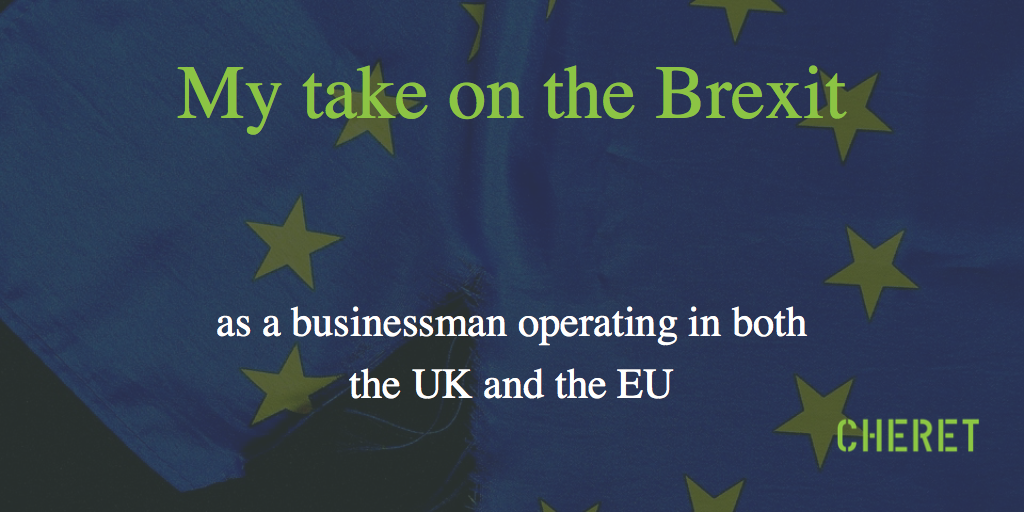 In the wake of the recent referendum of the United Kingdom’s membership of the European Union which in short was just called “Brexit” for those in favour of leaving the EU, there has been a lot of buzz online and elsewhere. This of course was to be expected of a vote with the potential of having wide ranging consequences. I’d like to call a lot of what’s been going on merely “noise” while trying to distil the essence of it which I’d like to call “signal”.

Now in regards to the “noise”

We have seen the global economy losing roughly two trillion dollars in stock market value on the day the results of the vote were announced. The value of the Pound Sterling plunged to its 31-year low and a significant increase in spendings on gold and government bonds was noticeable. Major employers across the UK announced a relocation of significant numbers of employees to countries within the EU (i.e. the Republic of Ireland).

Rumours then spread of the Scotts wanting to leave the UK in order to join the EU, a possible unification of Northern Ireland and the Republic of Ireland and some talked about the City of London declaring sovereignty from the UK becoming a City state and then join the EU. Prime Minister of the UK David Cameron announced he will step down from his office come October as his belief is that the UK should’ve remained as part of the EU which he made clear from the beginning. Experts told Cameron in advance that employing the referendum itself is an act of his own undoing. EU officials told the UK in a very clear tone that the process of leaving should be carried out soon and quickly. Before the votes were cast, Cameron told the world he would file the necessary paperwork (notifying the European Council of the intent of leaving the European Union in accordance with Article 50 of the Lisbon Treaty) on the day after the results of the referendum would be announced. That didn’t happen. Instead Cameron leaves it to his successor in office to do the actual work of tipping over that first domino piece in what currently seems to be an unfathomable domino day style obstacle course with a record amount of moving parts and pieces. No country ever left the EU and the UK might be the first one. Rumour has it that this may have set off a chain reaction of a large number of countries coming right after the UK in their wish to leave.

Shortly after the results of the votes were announced, a divide between young and old voters surfaced. We’ve got figures showing that the younger generation voted to mostly remain as part of the EU while elderly people mostly voted to leave. One could argue that the younger generation wanting to stay has to longer live with the repercussions of the vote of the older generation to leave. Different parts of the country cast different majority votes as well. I will not get into any detail here as I believe at the end of the day this is all part of the noise. What is also very interesting is, how many people cast their votes. Was it around 75% of the people voting? Congratulations, you seem to have asked a good question that many people are interested in and actually have an opinion about. The next thing that surfaced was a petition that calls for another referendum since the first one didn’t turn out to be over 60% in favour or against leaving the EU. In the meantime we’ve learned that the number of signatories is rigged as it turns out a bot or script may have falsely and randomly signed the petition.

Many woke up to the news of a majority vote of the UK to leave the EU and found themselves in an odd mood. In a recent conversation with local members of the economy and the press I’ve said that I don’t care what the UK is going to vote. I will respect them whatever their belief in or not in the EU is. The UK will vote for or against the EU and not for or against relationships with EU member states. And definitely will my best friend living in the UK possibly voting against the EU not vote against me personally. The UK may be out of the EU and we’re still friends.

The signals I get from all this Brexit

So yes this referendum definitely did a great job in starting a global discussion about many things. First and foremost we should get the clear signal that at least one country of the EU is not satisfied with the performance of the EU itself, that EU officials are unelected and unaccountable and that a nation might be better off without the EU. The UK population has clearly put democracy before money. I congratulate the UK as a nation I hold very dearly in my heart. You were the first nation to be asked a question no one else has been asked before. You were strong enough to actually publicly and openly ask the question in the first place. You are now at the epicentre of a possible ripple effect. Who’s next with a referendum? Some call the Brexit a worst case scenario. Inevitable? Change is constant. We’d rather get used to change and prepare for it. What we’re experiencing is a rattling of swords. The referendum itself is not legally binding but anyone responsible for carrying out the will of the people would be ill advised not to follow the ruling of his own country.

Consequences of the Brexit

As a businessman operating in both the UK and the EU I don’t think the consequences are noticeable for quite some time. Who actually knows if there are any consequences and if they’re all going to be bad?! Who will be the next Prime Minister and see the leaving of the UK through? On a more practical level, though: I’ve always had to show my passport when flying. Exchanging between Euros and Pounds has always happened in the past. Though not noticeable for me as I’ve always used credit cards or debit cards and rarely handle cash. I’ve always been a fan of the Pound Sterling as a currency and a value and actually trust it more than the Euro. Everyone competing on a market needs to be an attractive option so everyone needs to improve constantly. For all the good things the EU may have been responsible for in the past I myself am not entirely convinced that the EU is such a good idea in its current construct and conduct. We definitely have a surplus in administration (didn’t directly want to call it “bloated machinery”), an overzealous regulatory system and a lack of democratic processes. As a businessman I like a larger and unified marketplace, which the EU definitely is. It makes many things easier. As a citizen I want to have a say in what rules and regulations I’m going to be subjected to.